I was sunburned and drunk by noon. Coming from a girl who drinks rarely these days and applies SPF 30 on a daily basis to go to work inside, that’s saying a lot. They hand you a free beer at the finish line of the Xterra Freedom Fest 10K even though it’s only 10:30 in the morning and you’re dehydrated and overheated. After over an hour of running through mountains and valleys in the scorching sun, one beer packs the equivalent punch of three or four.

Seven weeks passed between the triathlon and this race and since then I ran exactly zero times. Lacing up my sneakers without so much as a pre-race stretch and heading out onto the trail for a 10K on a hot July day was a pretty stupid thing to do, and I’m paying the price.

The trail started out uphill. Then we turned a corner and ran uphill. After that there was a huge hill, a small decline, and – you guessed it – another hill. Even though we started and finished at the same spot I could swear we went uphill more than we ever went downhill. It was brutally hot by 8:30AM and the race didn’t even begin until 9:00AM.

A mile in I could feel blisters forming on my feet. I’m still running in the very same shoes I started with the first time I jogged around Kaneohe thinking maybe I’d run a marathon someday. File that away as another really stupid thing to do…

The sun was relentless and I was sweating much more than usual. So what was the next stupid thing I repeated mindlessly as I ran? I kept using my shirt sleeve to wipe the sweat from my face not putting together the fact that I was simultaneously wiping my sunscreen off.

Oh and did I mention the part about not eating breakfast? STUPID!

Following the race with a couple of beers and not enough food from the free BBQ that (not-so-surprisingly) had very little vegetarian fare was far from brilliant as well. Then I headed back out onto the trail to help direct traffic for the mountain bikers before having one last beer.

I will say that overall I had a blast but frankly I’m a little surprised I made it home without incident. I definitely went too far and made a lot of bad decisions. When I got home and assessed the damage I realized I was severely dehydrated, sunburned, covered in a heat rash and generally unwell. I felt ill all evening yesterday and slept for about twelve hours last night. I was miserable to say the least and I am more sore this morning than I have been after anything I’ve attempted so far, including the marathon.

Hard lessons were certainly learned from this experience but alas, all was not awful. Because the thing about the Ka’a’awa Valley where I was running, is it looks like this: 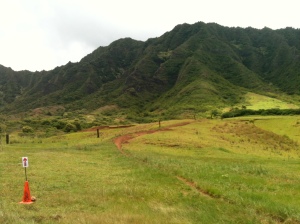 My apologies for the lame camera phone pics. Click here to see a stunning aerial view of the entire ranch.

3 thoughts on “That Was Brutal”