San Sebastián is a bustling city and today is the first Sunday this spring where it hasn’t been raining here. Everyone is out on the road—locals, tourists, buses, cyclists. Oh my goodness there are so many cyclists! It’s important for us to stick close together, which is easier said than done when you factor in traffic, stoplights, and a never-ending stream of roundabouts. (Boy do Europeans really like roundabouts!)

Once we make it out of downtown we’re riding fast and strong, absorbing the energy from the cycling clubs crowding the road. At one point we even stop and watch a time trial race go by. One by one I catch whiffs of competitiveness floating off the backs of the male gerbils of our clan. It’s fun to observe and it gets me cycling faster as well.

All throughout Spain drivers have been accommodating and careful and here on the coast road out of San Sebastián it’s no different. It’s an accepted way of life and a huge national sport, which garners a lot of respect and safety for everyone sharing the road. We’re all in our big chain rings, charging the stunning coastal descents and doing our darndest to keep up with the pros. It’s exhilarating.

Somehow I miraculously find myself in the lead. Up ahead I see a tourist lookout with absurd photo ops and signal the group to stop. I don’t know about them but I could use a break from the adrenaline rush.

We gather together and ask a local woman to take our picture. Mark makes the international hand gesture of air clicking a now ancient point and shoot camera. “Por favor, una fotografia?”

“We don’t speak Spanish here,” she replies in heavily accented English as she takes our phones and frames the shots. She is polite but firm. “If you would like to learn, try asking about Basque.”

Aha! That’s why the teenager behind the counter at the ice cream shop last night rolled her eyes at me with such force I could hear them creaking in their sockets. Broken Spanish is much more offensive than perfectly good English in a region that has been fighting for its independence since Francisco Franco came into power in 1939 and banned the Basque language. It wasn’t until Franco died in 1975 that these people were legally allowed to speak their own native tongue.

Face palm! God being a tourist can make you feel like such an ass sometimes.

(And yes, we have been eating a lot of ice cream on this trip, what’s it to you?)

We wind our way along the coast for almost 50 miles until we hit the harbor town of Lekeitio. All day we’ve been referring to it as the K-town because no one could remember the name. Luckily Sam drew us another map and Paul has taken to writing town names on his leg before setting out for the day. 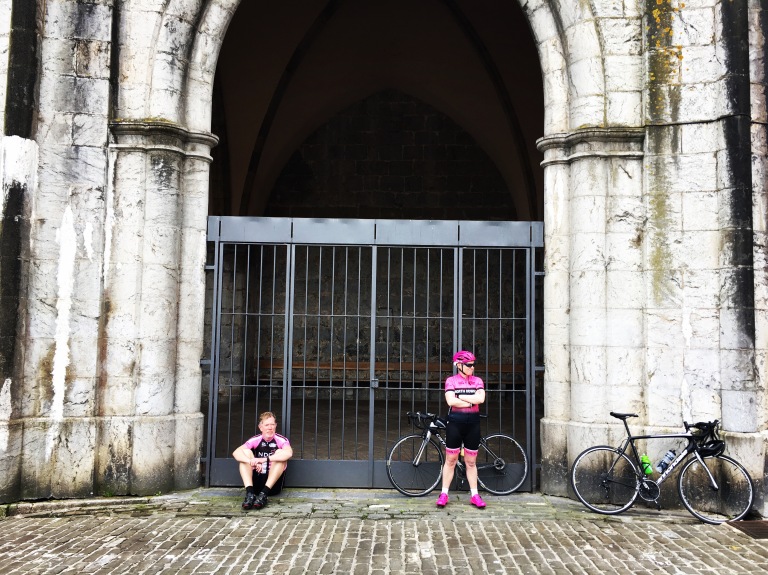 Here we witness the elusive Claire and Sam, a.k.a. the Speed Demons, in a rare state of gerbil (gerbile?) rest.

There’s a festival in the town square by the water. At first it calls to us—culture, music, dancing!—and then we come to terms with how hungry (make that hangry) and impatient we are. The restaurants are spilling over with patrons wistfully chomping on tapas, sipping beer and wine in the salty sea air. To them this is a beautiful lazy Sunday, but we’re in our standard mode of Drastic Calorie Deficit (read : famished) and this is not going to work.

Sam has a brilliant idea. “What if we just go to a store and buy a few baguettes and some cheese?”

We’re so hungry each of us could eat an entire baguette, which we almost do. Sam purchases four enormous loaves of bread while Mark and Paul go in search of condiments and cold cuts. There’s only seven of us and after ten minutes of eating, the cheddar/edam/salami/bologna/turkey/pepperoni is gone and there’s really not much bread left . . . 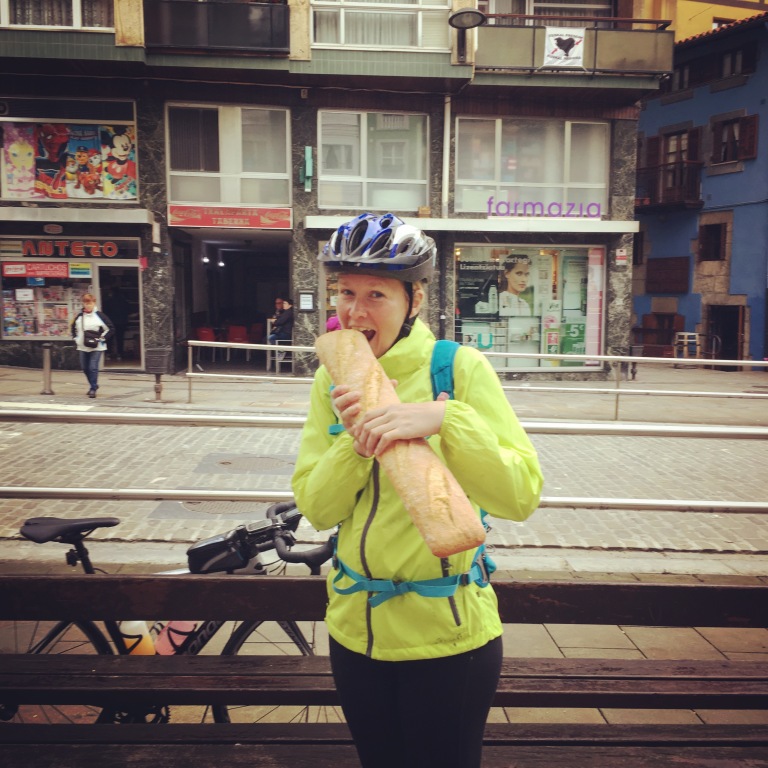 Yesterday on our way into San Sebastián I managed to master one single word in Basque: Kaixo! which means Hello. Today I’m working diligently on the much more complicated phrase for Thank You: Eskerrik asco.

I’m also spending a good portion of the day singing I, Don Quixote from Man of La Mancha. After Lekeitio our post-lunch route sends us through magnificent rolling farmland. Sam, Claire and Paul are up in front. Andy and Mark are close behind. Ciarán and I are holding steady in the middle. The road bobs us up and down, around and through.

Sometimes I sing to myself and then when I know Ciarán is out of earshot, I belt loudly for the livestock in my best Peter O’Toole impersonation (Simon Gilbert actually). They probably can’t hear me over their constantly clanging bells but I don’t care. This is apparently my super secret weirdo happy place: singing to sheep and cows and horses on the back roads of foreign countries.

In time the farmland morphs into another magical fairyland, this one called Urdaibai Reserva de la Biosfera. It’s a forest and bird sanctuary that runs high along the cliffs of the coast. But it’s now been two hours since lunch and the hobbits are ready for high tea, so we wend our way back down to sea level in the harbor town of Bermeo. A quick coffee perks everyone up and we get moving once again.

Climbing back out of Bermeo requires a steep jaunt up a 14% grade hill. It almost breaks me. Seriously folks, a hill like this defies physics. I’ll allow the fine folks at Fat Cyclist to make the point a little clearer:

For the first time on this trip, I hop off my bike and push it up the last hundred feet. Up until this point I had been getting stronger with each ride but this afternoon I’m losing steam with every mile. It doesn’t matter how much energy (food) I put into my body. It’s my brain that’s slowly giving up and we still have a ways to go.

Once we make it back into the forest I’m done. I have no choice but to call it in. I’ve ridden 73 miles and climbed over 6,500’ since this morning. I don’t have another 28 miles in me. As the last six riders fill up their water bottles and pound protein bars, I quietly put my bike in the back of the van, doing my best to hold back tears of disappointment. My mood has tanked and I don’t want to affect anyone else’s resolve.

I hop into the cab of the van with Alistair and he can tell I’m upset. As the remaining cyclists spin their wheels back onto the pavement, Alistair turns down the volume of his BBC Radio play and let’s me cry it out. I give myself seven seconds. I don’t know why that’s the magic number but it is. I count to seven, wipe my eyes, and make a choice. I know I can turn this perceived failure into a success; I just have to figure out how.

Not too far up the road the team rides right past a sign that says the road is closed. But it only says it in Spanish and Basque so they don’t notice. Alistair and I translate the bad news and speed past them to assess the damage up ahead. When the road block appears I climb out of the van and run up as far as I can go. Around the first corner I see some major renovation work from a mudslide but on a bike it could be passable.

This is a swiftly curving coastal road so I can’t see anything past where I’m standing. We look at the map, which shows a very long detour, and give the team the news. They decide to push forward and will call us if they have to turn around.

Back out on the main road the first two thoughts that pass through my mind are ‘gas station’ and ‘snacks’. We stop and fill up on water, granola bars, salted nuts, and chips, then drive the detour and pull off at the top of the last big hill on the route. We’re parked far enough off the road that the team could sail right by us without noticing. It’s getting dark so I pull my lights off my bike and carry the snacks up to the corner.

Gerbil Team Six has ten more miles to go, then they have to navigate bridges and major city traffic to get into downtown Bilbao. I attach my lights to the bikes that need them most and wish everyone luck. Barring any emergencies, we’ll see them next at the hotel.

Alistair has driven in Bilbao before and it’s hard enough for him to maneuver the van through downtown. We park somewhat illegally in front of the hotel and get word to the other four riders (who had called it a day after lunch) that we’re here. While we wait for the last members of our little clan to make their way into the city, Elena, Helen, Thor, Vanda, and I get to work on disassembling bikes. Thor brings down his pedal spanner and allen keys. Wahoos and saddles come off. I start a pile of water bottles that need to go back to Bike Breaks.

My disappointment has been marvelously absent since I wiped my eyes in the van and changed my mind. I’ve enjoyed feeding the team and cheering them on. I’m a natural troubleshooter and I like these tasks of handing off luggage, checking gear inventory, packing the bikes precisely inside the van. With a big grin on my face I envision myself doing this again, not just for fun but as a job.

Today’s ride was one of the most difficult all week and in the end only six insane–I mean incredible–cyclists finish all 101 miles of it. One by one they arrive at the hotel equal parts overjoyed and exhausted.

It’s hard to believe the cycling is done. How is it possible that we rode so far and yet it all flew by so quickly?

Sending so much love from Bilbao ❤ ❤ ❤